MoonSharp is meant to support multiple platforms. It can’t choose which platforms it will run on, as that’s the choice of the end user of the library, so it has somehow to be able to run, say, as a daemon in Linux, as a WPF application, as an app on a mobile phone or a game on a console. For example, APIs as simple as a humble FileStream are not available on Windows Store Apps.

Also, MoonSharp doesn’t know how it’s supposed to run and work on the app using it. For example, what if you want loadfile to load from embedded resources instead ?

For these reasons MoonSharp has two objects hierarchies:

Note that usually script loaders are independent from platform accessors, although they can use their method if they want. This just to say that if, for example, your platform accessor does not support loading from file, it doesn’t necessarily mean that your script loader can’t and viceversa.

Depending on the platforms you have these choices of script loaders :

The default script loader used by MoonSharp if no redefinition happens is selected as follows:

How to specify which script loader to use

Let’s say we want to have script loaded from embedded resources of the current assembly.

There are basically two ways, one local one global.

First, given a script you can change its script loader with:

Otherwise, the following can be used to specify that all newly created scripts should use the new script loader:

How to customize the behavior of the require function

A common need is to change which directories are used by the require function to load modules.

Most script loaders extend the ScriptLoaderBase class which exposes a ModulePaths property which contains all the paths that will be checked to load modules.

You can easily change the paths:

A word of caution. Changing the ModulePaths and/or IgnoreLuaPathGlobal is not enough to “sandbox” which files can be loaded. If you need this, implement a custom script loader.

Then, right-click on the file in Solution Explorer, the following window will appear: 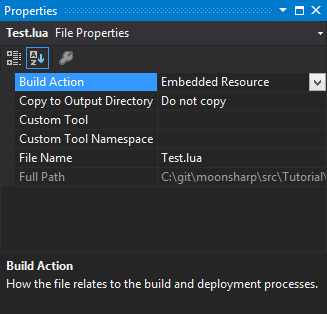 After this, let’s just use the right script loader:

Similar steps can be followed in other IDEs, for example Xamarin.

How to create your own script loader

Time to create your own script loader.

Both are pretty self-explanatory, but let’s go with the first for the sake of it.

Our script loader, will actually generate a little script on the fly with the name of the requested file instead of really loading:

Getting this to work is pretty easy:

Running all of this, as predictable, will print: